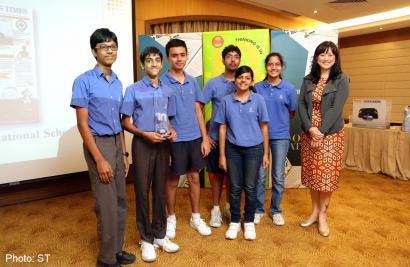 The competition, which is the revamped version of the Straits Times National Schools Newspaper Competition, featured 10 finalists chosen from schools across the city. The 10 teams had to produce a news video of professional cyclist Lemuel Lee, a member of the OCBC Pro Cycling team, post online news updates and design the front page of The Straits Times.

The NPS International team did well in this competition in its previous editions, winning the competition in 2010 and finishing second and third in 2011 and 2012 respectively.

The NPS International team, though proud of what they had achieved in the latest competition, were disappointed that they could not manage a podium finish.

The team's editor Shail Modi said they could have done better.

However, the highlight for the team was what they learnt through this exercise, like thinking out of the box and coming up with ideas that pushed the boundaries of creative thought.

Another member of the team Venkatesh said that comparing their performance with those of their predecessors from the last three years would not provide an accurate or fair picture. "It was a new competition this year, with completely different components and parameters. It required a more multifaceted and varied skill set from the team. Also, there were new teams like SAS participating for the first time and we had no way to anticipate their abilities," he said.

Speaking about their design of The Straits Times (ST) front page, the team's designers Mehek and Natasha said that though they had to conform to ST housestyles, they made changes which they thought would make the paper more engaging to youngsters.

"We shifted the skybox to the right vertical column, because we felt that it draws the reader's eyes to what else is in the paper more naturally. It's more aesthetic for young people who are used to a web/online layout where links are always on the side. A reader will be glancing at what else is inside even while moving down the page while reading the main article. But if the skybox is on top, the reader has to specifically look up to look at it," they said.

The NPS International team won the award for the Best Integration across all media for their innovative online blog updates, infographics and links to the print product.

However, the team felt they could have done their video better. "We recorded the raw video and then edited it but we realised that we had a lot of background noise. We thought of removing it completely but that made the video sound very fake and robotic almost. So we just toned down the background noise. We also had to make several cuts to the video since Mr Lee was getting tired and distracted and the answers were too long. Because of all the cuts it looked rather fragmented and disjointed," Venkatesh said.

Designed by The Scribble